Have you ever stopped to think about the colours? Ever looked at your surroundings and gone, “Yep, today is Green”? Or “this place makes me feel yellow.” I never had. Well not consciously anyway. Until I arrived in France – a country of colour! So let me share with you my French rainbow from the past 3 days…

ORANGE
Ok I’m cheating a little on this one. I didn’t see Orange. And I didn’t feel it. Nope this one was simple! The village we visited on Tuesday was called Orange or /Or-ah-nje`/ (pronounced in your best French accent).

The Théâtre antique d’Orange blew me away! It amazes me that a structure built in 25 BC can still be upstanding. I can’t help but picture myself standing in the same location thousands of years ago. Do you do that too? Or is it just me? I sat myself half way up the ampitheatre, where the middle class would have sat to watch mimes and tragedies. I imagined the theatre in its prime, decorated with intricate backdrops, which would have been boarded by tall stone columns. I pretended to be surrounded by the sounds of “oohs and ahhs” and laughter cooed from the audience. My imagination and I could have sat there for hours. What amazes me more is that performers still take to the stage this day. What I would give to lace up the ballet shoes and twirl across that stage… 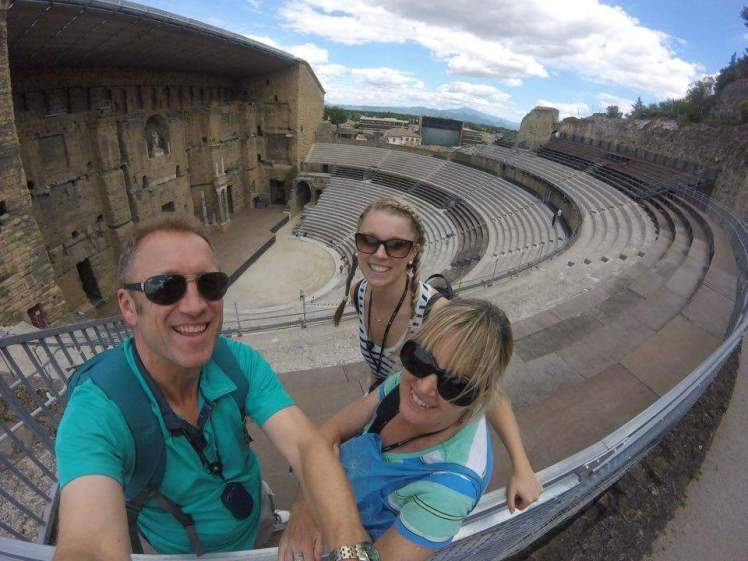 GREEN
Green, green fields as far as the eye could see… Which is a long way when you’re perched high on the hillside village of Venasque. A quiet little town filled with small, twisting streets on steep inclines. Residents front doors lie embedded in the stone walls only metres apart from their neighbour. Bright colours line the streets as flowers peer over every window sill. But green is forever on the mind as you catch glimpses of the fields below between the cracks of balconies. Green, green fields. 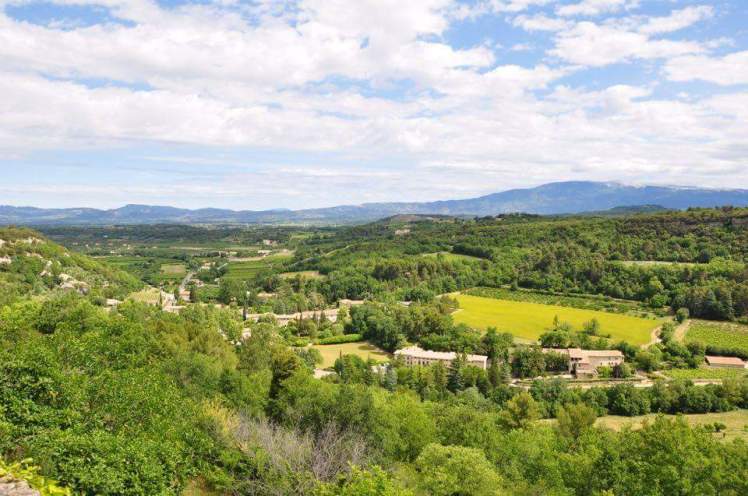 PURPLE
Never have I seen so much lavender! I wasn’t sure whether to be more impressed by the fields of purple or the Abbaye Notre-Dame de Sénanque. The monastery founded in 1148 was the backdrop to its foreground beauty. Although our (very) basic French is improving, we decided to pass on the hour long tour of the Abbey spoken in French. Plus, I felt a little awkward having to turn my cardigan into a long skirt to cover my bare legs, which was apparently not suitable for the Abbey’s grounds. So a tour of the gardens would have to do. Which suited me just fine. I was just happy soaking in the sun and breathing in the scent of purple. 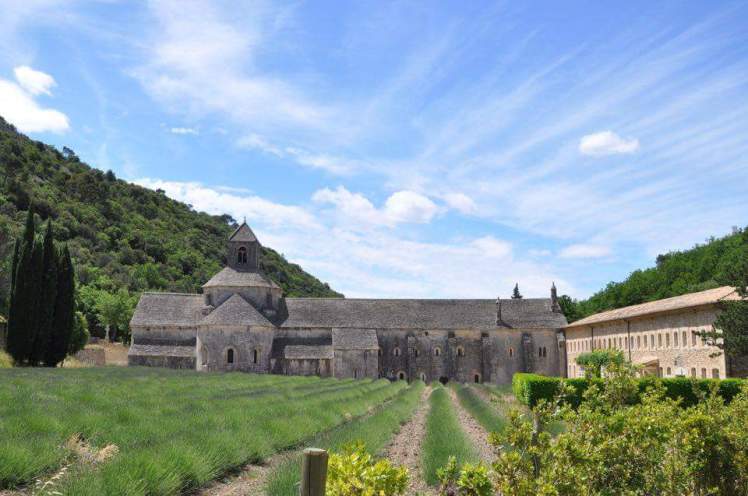 YELLOW
The stone village of Gordes has been listed as “one of the most beautiful villages of France” and I can see why! It may have taken an afternoon of getting lost through tiny streets of tall yellow stone to find it, but eventually after climbing steep cobble stone streets we made it. The money shot! Panorama views of yellow stone houses piled on top of one another as they spiraled around the rock where the village is set. Perched on top of it all is the 11th century castle and 18th century chapel. The site of this yellow, medieval village is a vision I won’t be forgetting anytime soon!

GREY
Thunderstorms. All day. That’s what was forecasted for Thursday. But after a dry morning we decided to brave the weather Gods and venture on a hike to a nearby Abbey and Chapel. Well turns out the weather man was half right. There weren’t any storms but rain did fall. The funny thing was that I simply didn’t care. It’s interesting how little the rain bothers you when you have nowhere to be. No one to see. Nothing on the agenda at all. In fact I welcomed the rain. It was fun to get caught up in it and have a feeling of carelessness wash over me. Not to mention the smell of warm summer rain and pine trees filling the air shortly after.

Although the grey clouds remained for the rest of the day, the rain only visited for a short time. The sun even forced it’s rays between the clouds to shine upon us as we scaled the rocky hills. Speaking of which – there’s a trick to these hills. You see it’s easy to get caught up in focusing on the top of the hill. You keep placing one foot in front of the other and pushing further forward. But the trick is forcing yourself to stop, turning around and take it all in. Because if you don’t you may just miss the most beautiful of views. I couldn’t help but relate this theory to everyday life. Being a person who’s always on the go it made me think about how important it is to stop once in a while. Just stop. Or you might miss out on the beauty that’s right in front of you. After all it’s not just about the destination but the journey you travel on to get you there…

So that’s my French rainbow. Maybe reading this will encourage you to think about the colours. What colour will your day be tomorrow?

One thought on “Colours of France”