​Fiona and I had been looking forward to travelling to Lagos. Not just for the beach and the famous nightlife but also because we would finally be reunited with Jess and Erin; our lovely Kiwi housemates from London.

After a delay with their train, Jess and Erin finally joined us on our hostel rooftop by 10pm. We had already set up cheese and wine to enjoy while we briefly caught up on recent events; a regular Friday night tradition for the four us. We decided to jump straight into the Lagos scene by checking out the local bars. With the Tavern being recommended by a number of friends and a short 30 second walk from our hostel it was hard to pass it by.

Excitement filled me as I realised one thing.

It wasn’t the cheap fancy cocktails.

It wasn’t the fact that they were playing tune after tune of my favourite songs. Nope.

It was the fact that here – I could dance on the tables! I was in heaven!
For those who know me well you would know that I love any opportunity to get higher than a crowd and perform what I love doing most. The bar tender tried to convince us by asking what song it would take to get the table top dancing started. I simply replied with, “I don’t need a special song – I’ll get up there right now!”
Tempted to try the other bars we wandered the streets, surrounded by other young tourists looking for our next bar. But nothing seemed as fun as our time at the “Tav.” So we called it an early night and hit the hay!
We were disappointed to find out that all kayak and boat tours had been cancelled for the next 3 days due to rough waters. We had been looking forward to exploring the caves by boat and enjoying stand up paddle boarding but you can’t control mother nature. So we spent the morning exploring the coast line as we made our way to the beach. 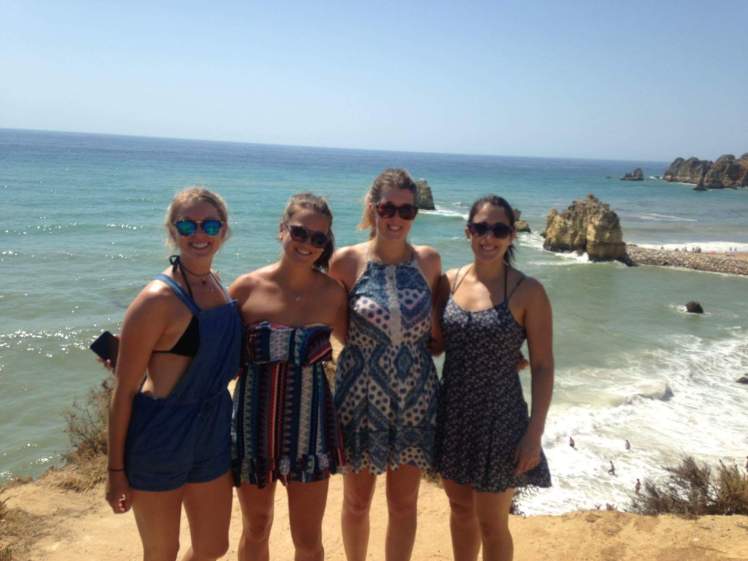 This is the life! Nothing makes me feel more at home then spending time in the sea and sand. Especially when the coast line closely resembles that of the Great Ocean Road with the sandy coloured cliff edges meeting the clear blue waters.

A tough day of relaxing on the beach was broken up by an all you can eat Japanese lunch. Yes I know we should be enjoying the Portugese cuisine but everyone had recommended we try this place out. Eyes bigger than our stomaches, we continued to order sushi round after round after round. Need less to say we were a little more body conscious when we visited the the beach later that afternoon…
After calling an early Friday night we decided to make the Saturday a big one- after all we were in Lagos! We were ready! We were excited! We were back at the Tavern dancing up a storm aaaaaaaaand then we were back home. An hour after heading out. There were no surprises when our tactical mid-night nap very quickly turned into a deep sleep. But these were the beginnings of the story of “2-0- Juan”…
As I woke up I felt a sudden panic for 3 reasons:

1. We had slept through and missed the whole night!

3. I was spooning someone! Thankfully it was just Jess!
I smiled to myself and shook my head at our terrible efforts to be “party animals”. I quietly slid from Jess’ bed and made my way to my own in the hope of catching a few more hours of shut eye.
“Ahhh! There’s a boy in my bed!” I yelled to the other girls.

Everyone woke up and started asking questions. Who was this guy and why was he in our room?? As he slowly woke from his deep sleep he began to look just as confused as us as we started questioning his actions.
We were all in stitches as the 5 of us tried to piece together the most logical story for Juan’s appearance. We decided that after locking himself out of his own room, Juan began his hunt for a new place to sleep. To this day we still can’t decide how Juan, the 25 year old from Peru, entered our room. We’ve narrowed it down to two scenarios: either we left our door unlocked or one of us slept walked to open the locked door. I guess we’ll never know! But it sure did make for a great story and the beginning of a new friendship.
Juan ended up spending the day with us at the beach that morning and later introduced us to his friends from Canada. One of my favourite things about travelling has been the people we’ve met and the friends we’ve made along the way. It’s so refreshing to meet other young travellers who all share the same passion to explore the world and this night goes down as one of my favourites.

We all helped to make bowls of white Sangria and Caiparinhias; refreshing cocktails that we would sip on as we sat on the rooftop listening to music, watching the sunset and constantly laughing at Juan’s hilarious jokes. We decided the group needed a name. With our hostel room being number 201 it seemed simple. This new group of friends would forever be called 2-0-Juan.
What a way to finish our amazing stay not only in Lagos, but in the beautiful country that is Portugal.

The rock scramble was absolutely worth it for this incredible view! ❤️ #mountamos #wineglassbay #freycinet #traveltasmania
Hobart skies putting on an epic show pre @rufusdusol 👌
Splish splash 💦
And that's a wrap for 2019 Touch! Definite highlight of the week is running around with these silly sausages! #Bunningssnags #snaggys #dickoftheday
Sunshine, Music and the Best of Friends! What more could a girl ask for? #Grapevine2019
What an incredible weekend 🐯 This game is more than just the joy of watching the sport. For me, it's about the joy it brings to our family. How grateful I am to have us all together for another Richmond win. My first Grand Final experience was certainly one I'll always remember! ❤️ #RichmondTigers #TigerTime #GoTiges #aflgrandfinal
Tanna 🌿 Beautiful people, Fun treehouses and plenty of time to explore! #Tanna #vanuatu
Was pretty thankful to learn about the eels AFTER we'd been for swim in this beautiful blue hole! #ihateeels #peopledothiseveryday #matevulubluehole #santo #espiritusanto #vanuatu
Santo beaches 🌊🐚 #lonnocbeach #portolry #santo #espiritusanto #vanuatu
%d bloggers like this: