​Ah Florence! A city of romance, Renaissance and our favourite of all – food! Amazing food! In fact, while in Florence Fiona and I practically created our own food tour. But first let me tell you about one of the most amazing buildings I’ve stepped foot in: the Cattedrale Di Santa Maria del Fiore. 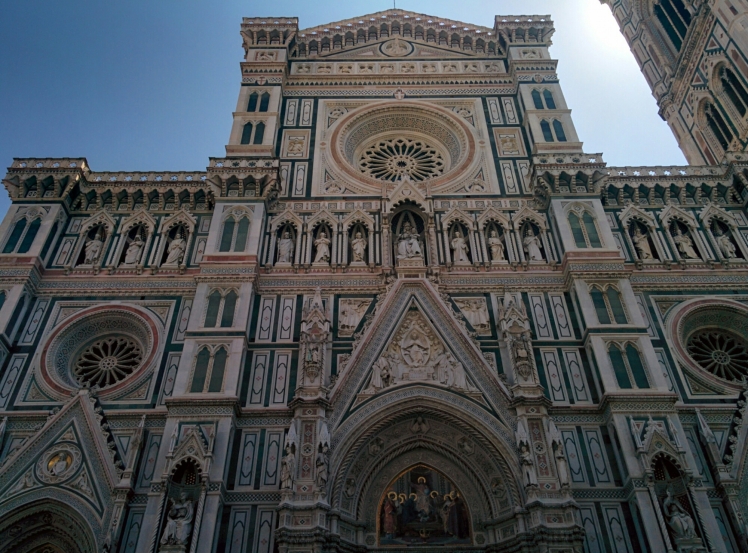 Located in the Piazza Duomo, the cathedral complex comprises of the Basilica with its large dome, the bell tower, the baptistery and the museum. The complex is stunning from first sight and the dome can be seen from a far right throughout the city of Florence. The exterior of the Basilica is decorated with hundreds of detailed statues, surrounded by marvellous pink and green marble panels. You could spend all day just circling the outside of the complex, but then you wouldn’t discover it’s inner beauty.
We began by exploring the museum of the Duomo. This is where all the secrets and treasures lie! Most of the complex is now created with replicas of statues, mosaics and brass doors, while the originals remain protected within the museum. It was fascinating to discover the detail and stories behind each decoration of the church. Our favourite were the huge brass doors which belonged to the Baptistery. Gold plated panels sculpted to tell stories from both the old and new testaments. They were incredible! 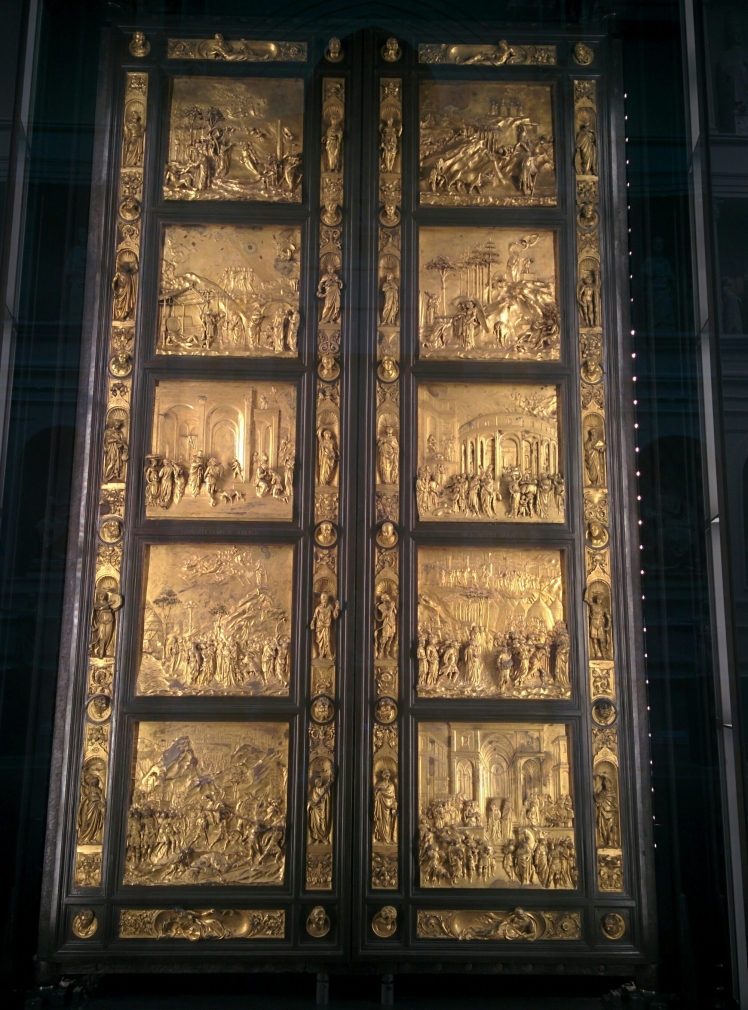 We then joined the line to visit the Baptistery; a small octagon shaped building placed separate to the Basilica. As soon as you step inside your gaze is immediately drawn towards the high ceiling. Stunning biblical artwork covered the ceiling. We had to keep taking breaks to save our necks from cramping. If it wasn’t inappropriate I would have loved to have laid on the floor and gaze at the roof. It was like the Cistine Chapel all over again. 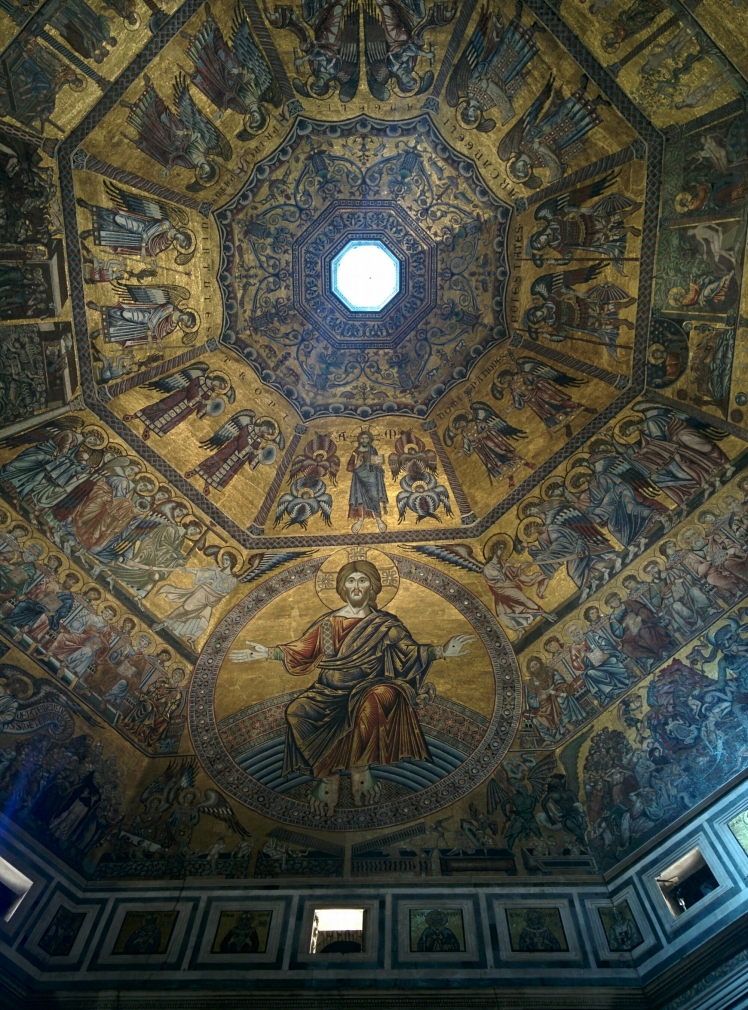 We had saved the most spectacular for last – the climbing of the dome! 500 steps later we had finally reached the top. Balconies inside the dome allowed us to peer down into the Chapel and look to the roof to see more pictures covering the ceiling. This montage depicted juxtaposing scenes of heaven and hell. The detailed images of demons and a firey hell was something I certainly wasn’t familiar with seeing in my Christian upbringing!
But now for the grand finale! We climbed out of the small brick opening in the dome and were welcomed with panoramic views of Florence. It was beautiful! Scattered amongst the sea of brown roofs were more glorious churches and castles, while a blue river cut the town in two. It was certainly worth the climb! 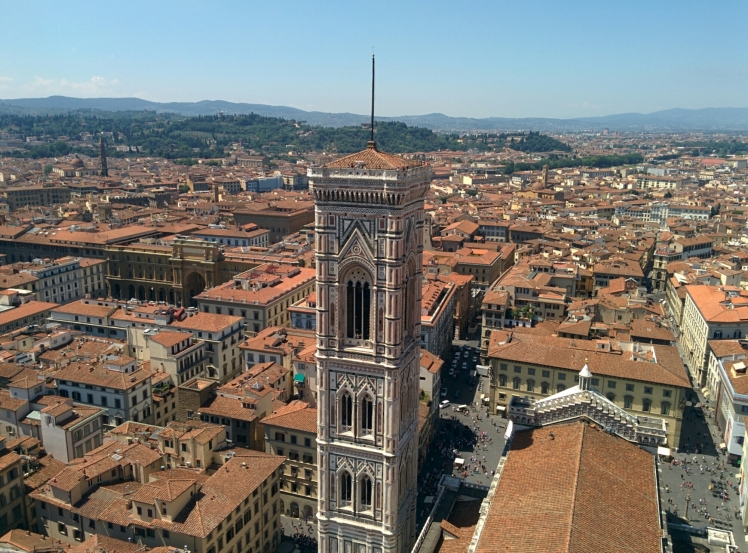 Now, as promised – the food! I’ll try not to make your mouth water with jealousy but I can’t guarantee it won’t happen.
La Prosciutteria Firenze

Initially we intended to just try a glass of wine. You know, just a nice quiet glass before dinner. But then we saw the delicacies displayed in the window and were immediately tempted to try more. 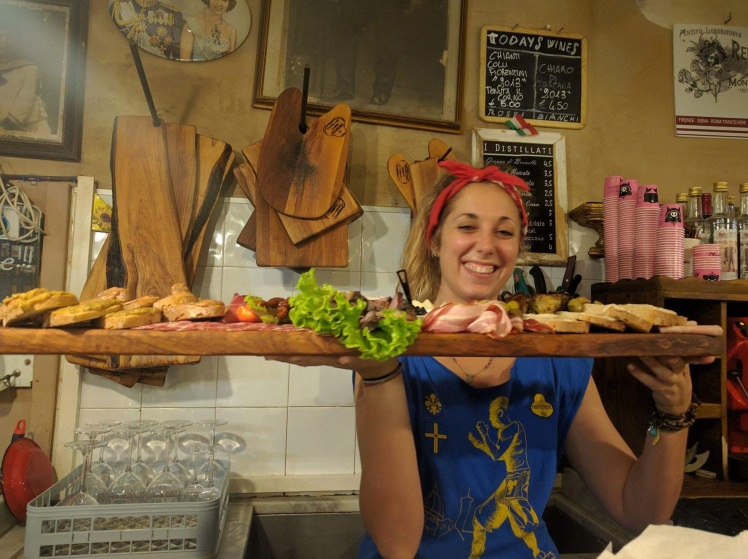 Well! Plans were changed immediately! We ended up spending hours at La Prosciutteria. The staff were incredibly friendly and one glass of wine turned into two, with an assortment of salami’s, cheeses, olives, fruit and preserves and to finish it all off, a traditional Sicilian cannoli! But our favourite part of the night was meeting the locals. A gentleman named Ricardo had been waiting for his friends for over an hour! Between his little English and our little Italian we managed to keep him company. He taught us more Italian, while we taught him a little English. He was very impressed that we had only been learning a week! A perfect first evening in Florence. 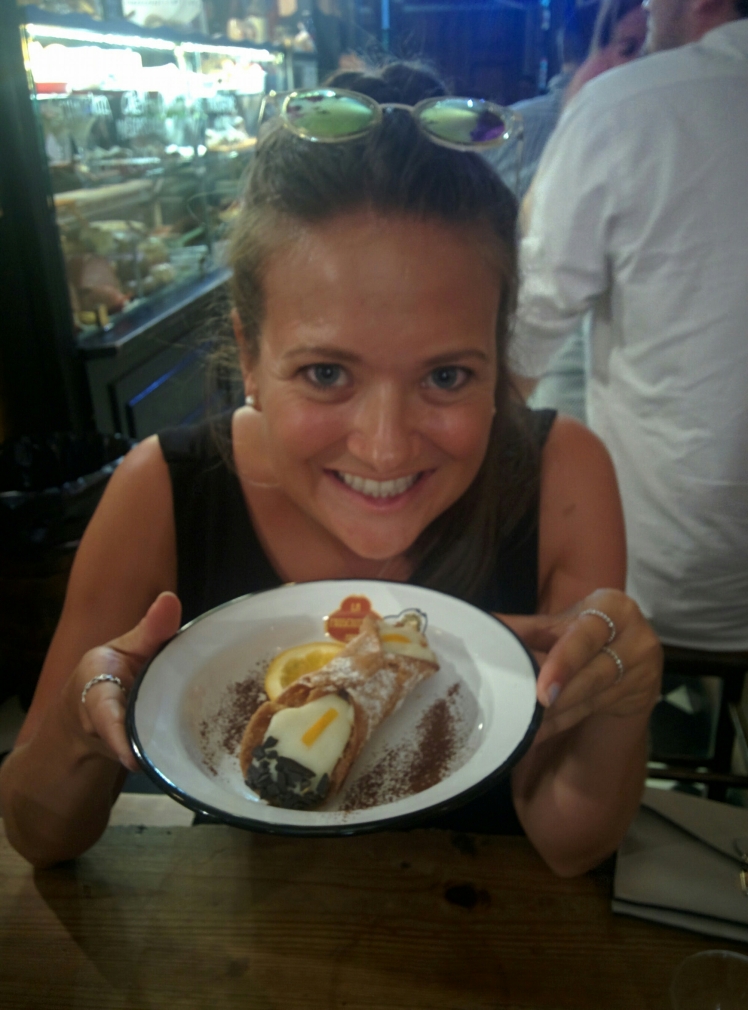 Sandwiches. We had been recommended sandwiches. In Italy. Hmm. Initially we weren’t all that tempted, but when you’re recommended by three different people you tend to be left a little intrigued as to what was so good about this place. We soon found out!
Ok so I’m not talking a traditional sandwich. For starters these were HUGE! Fresh preserves such a chilli spreads and truffle sauces, roasted vegetables and huge chunks of shaved cured meats were sandwiched between freshly baked bread. They were by far the best sandwiches I’ve ever eaten. If you’re ever in Florence make sure All’antico Vinaio is on your list! 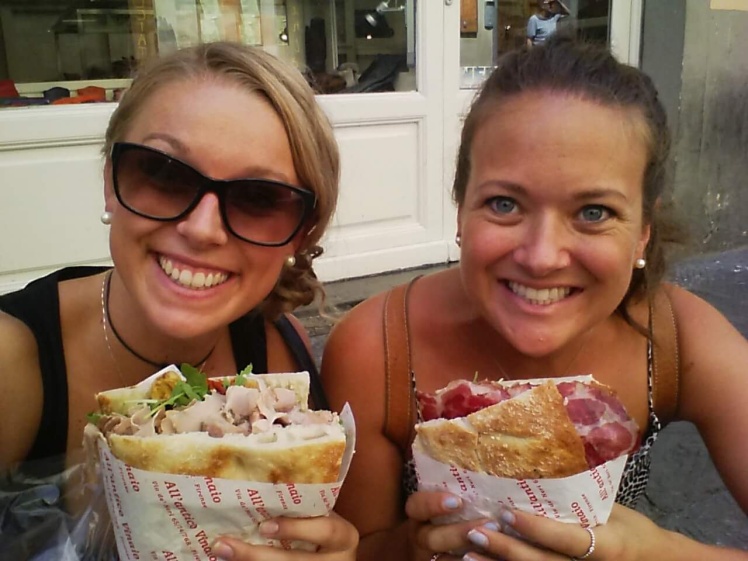 Then there was the gelato! Yes more gelato. Something that’s become a daily treat for our time in Italy. We visited La Carraia, a gelataria claimed by our host to sell the best gelato in the world. It didn’t disappoint! I was refreshed with berry and coconut flavours, while Fi opted for dark chocolate orange and her favourite, hazelnut. We then couldn’t help but share a small scoop of the white chocolate with pistachio. It was of course amazing!
Last of all – the food markets!

Stalls lined with fresh fruit, dried chillies and herbs, bottles of oils and vinegars, a huge selection of seafood and humongous slabs of meats and cheeses. Food heaven! Aka Fiona and Lisa’s heaven! A favourite thing of ours to do back in Melbourne and London is visit local Deli’s and food markets so it was no surprise that we loved wandering through the market sampling small treats. It’s just a shame that we had to hold back from making purchases as to avoid lugging them through hot countries! 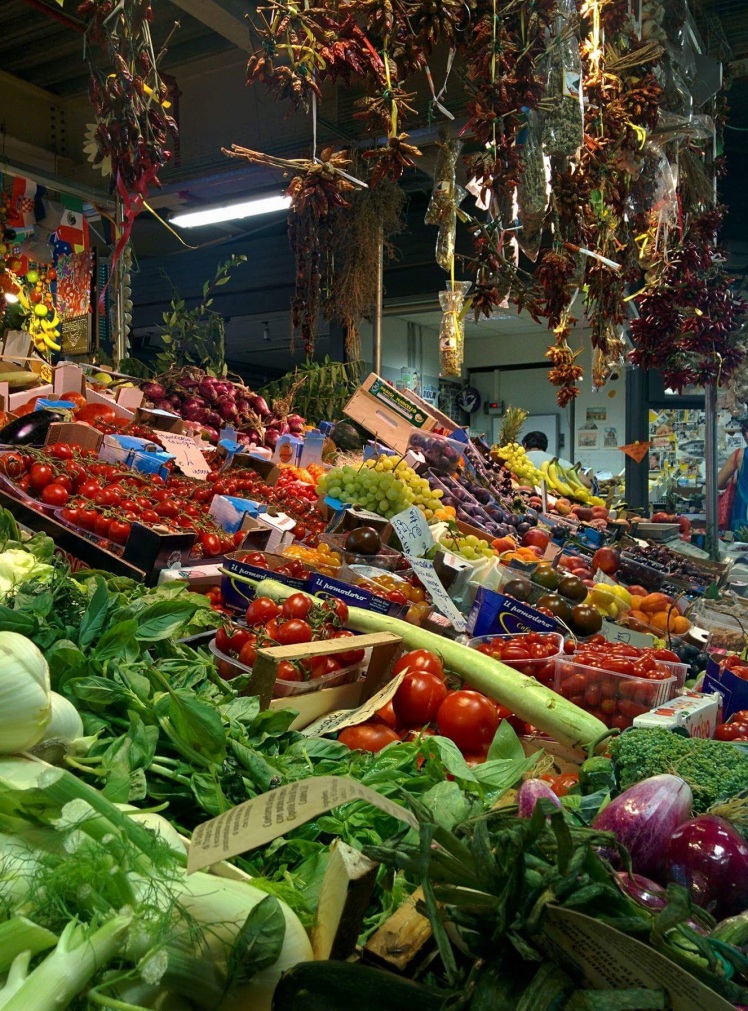 A short but sweet stay in Florence. Tuscany is looking up to be one of our favourite Italian regions yet… 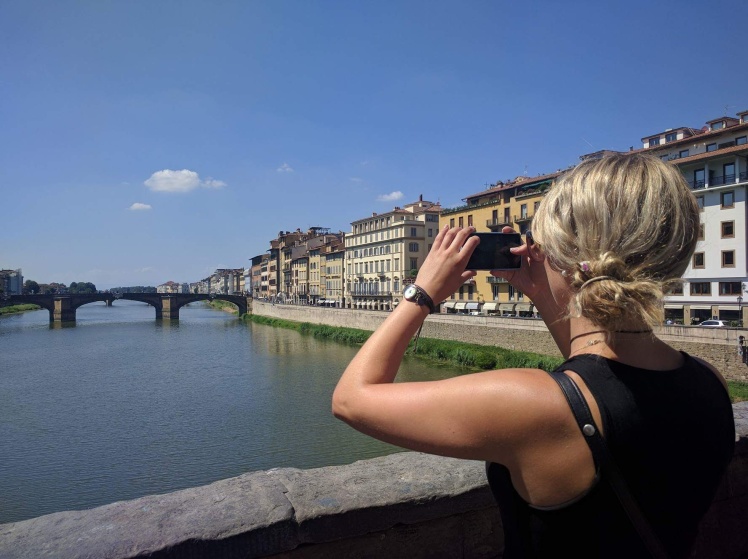 One thought on “Florence”