This was a problem for me. I’ve never really been a fan of the yeast tasting, bloat making drink. When Oktoberfest came to mind I always thought, “Man! How am I going to manage this one?” That was until summer hit…

It all started as a way of saving money. Sad I know, but my desperate attempts to save coin while travelling actually worked in my Oktoberfest advantage; I began to love beer. And thank goodness for that because if I could sum up Oktoberfest in one word it would be: BEER. Big delicious beer. But don’t worry Mum and Dad there was more to it than just drinking…

First things first – it’s all about the outfit! I never quite anticipated just how much fun it would be to get dressed up in a Durndell. Fiona and I were like little girls on the first day of school, lacing each others dresses up and braiding our hair.

We followed the sea of traditional German outfits towards the festival. Thousands of people from across the World all looked so happy and excited to be a part of the yearly tradition and I was soon to find out why.

As we entered the festival I didn’t know where to look. It was like watching an exciting match of tennis as I quickly looked from left to right, attempting to take in every single detail surrounding me. Gingerbread love hearts dangled from shop windows, pretzels and pork lay on display, giant ferris wheels and roller coasters decorated the sky and then there were the beer halls. The distant sounds of traditional German music and glasses chinking together enticed you to enter. 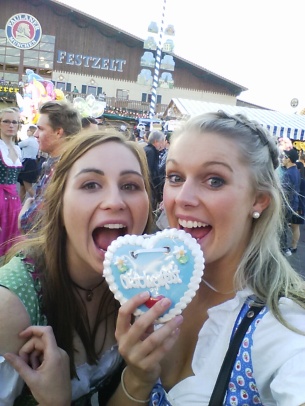 As you walked into a hall you were greeted with what I could only describe as happiness. Everyone was SO happy! There was dancing and singing. Beer wenches impressively walked past holding 10 steins in their hands. The band would parade into the hall, while everyone cheered and clapped. And then there was the smell of the food. The hot, delicious pork knuckles, roast duck and schnitzels. It was heavenly! 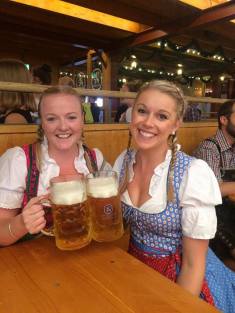 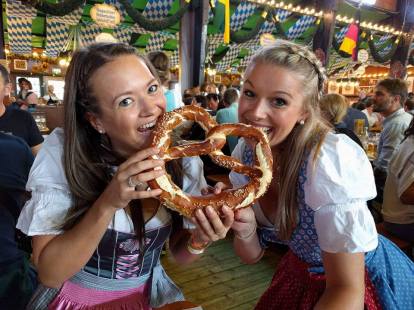 Once finding a table we were quick to make our first order of pretzels and steins. I looked at the litre of beer sitting in front of me and wondered how on Earth I could manage. But never have I tasted beer so good! Some enjoyed it so much that they would take part in a little tradition. They would stand on their table, raise their glass to the sky and then proceed to skull the entire stein. Hundreds of spectators would stand on their tables to chant them to victory. Most would finish, while failures were boo’d.

Equated to more dancing. Which of course equated to my happiness! Everyone would link arms and skip around. I particularly enjoyed pretending I knew the German songs, while attempting to sing along.

Equated to increased confidence. Meaning roller coasters, giant drops and other rides I would normally think would be a terrible idea. However it’s amazing what sky diving can do to someone. I’ve now become absolutely fear less on joy rides and instead spend my time holding hands of those that I’m consoling mid-roller coaster (cough! Kevin Norohna). 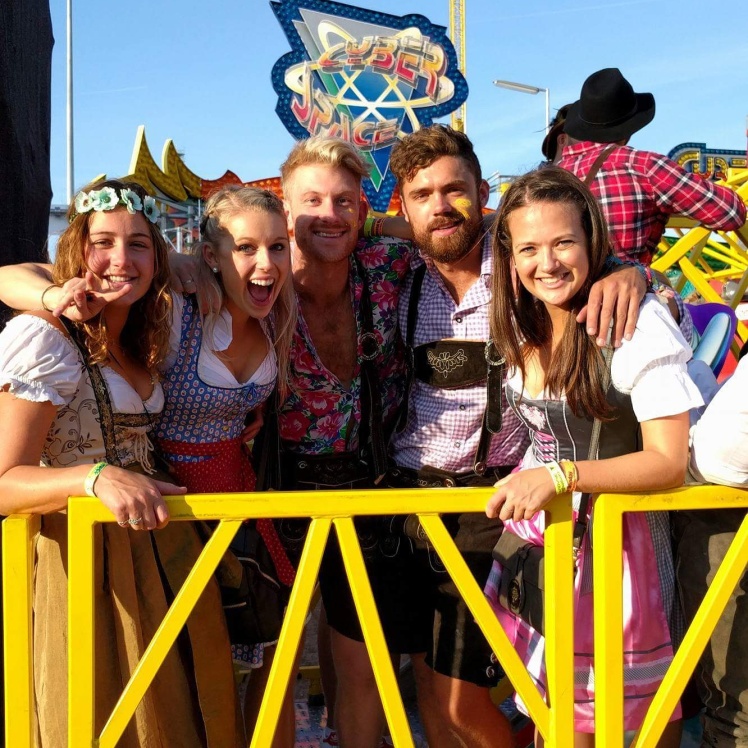 And that’s basically it. I don’t know what else to say. Oktoberfest is filled with fantastic beer, delicious food, hilarious dancing, terrible singing, more food, and hyterical laughter on the silliest of rides. It was an experience I’ll never forget.