Expectations. They’re a funny thing. Have high expectations and risk being disappointed. Lower them and you may just have the best time of your life. By all means I’m not saying we should live life with low expectations just so we can constantly be surprised. No, no, no. I love building up anticipation. Playing out the best possible scenarios in my head. It’s fun and builds excitement. No….all I’m saying is that I had low expectations for our time in Birmingham. Very low. It was hard not to when everyone gave you their two cents worth about how it’s going to be the longest eight weeks of our lives. But in hind sight I’ve now realised they did me a very big favour. I had low expectations. So Birmingham had me pleasantly surprised….

I arrived in town late at night. It was raining and I could spot a few suspicious looking characters. Yet still, I felt excitement about my new temporary home. I spotted a beautiful church (a secret/not so secret love of mine) right in the centre of town and I immediately sensed beauty.

After finally getting to see Birmingham in the day light I quickly realised it actually wasn’t all that beautiful. I wouldn’t call it pretty. Except for one of my favourite places in Birmingham; the canals.

As I wandered along the canals by sunset I was immediately transported to an Italian city. Beside the banks were small cafe’s and bars, where people sat outside attempting to soak in as much sunlight as possible. I caught up to long, thin canal boats as they slowly cruised through the still water. As I continued to walk, soft music grew louder. I turned the corner to find the source of the tune, where I witnessed a homeless man singing along with his guitar. He appeared content. He smiled at me as I strolled past and I smiled back. I regret not settling in beside him and joining in. He was the first of the many homeless people I would see in Birmingham.

Like other places I’ve visited in the UK, Birmingham was surrounded by quaint little towns just waiting for us to explore. First on the list was Stratford-upon-Avon; the birth place of Shakespeare. It was one of those towns that had beauty around each corner. Luke and I would literally gasp and point every ten seconds as we stumbled across something new. The cobbled streets were lined with tudor style housing and it felt as though the town remained in the 16th century. We popped in and out of little gift stores, marveled at the church (of course!) and smiled at the swans as we walked alongside the river. It was a beautiful little town that I only wish I could spend more time in. 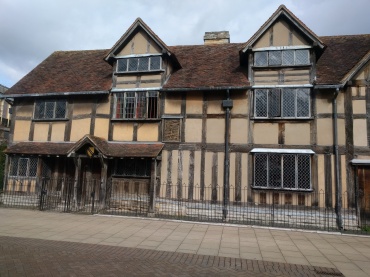 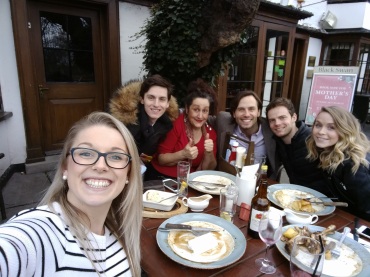 Another discovered gem was the town of Warwick. We were blessed with beautiful sunshine and blue skies as we enjoyed a classic Sunday roast. The highlight of the day would simply have to be hiring our Swan like boat (quite literally – it was a giant swan) and pedaling our way up to the castle grounds. It was beautiful! And finished perfectly with an ice cream in the park. 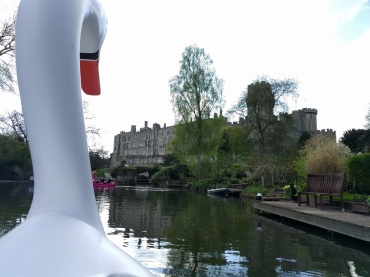 I wouldn’t say Birmingham was my favourite of the tour thus far. But I would say I thoroughly enjoyed myself. To be honest I don’t believe this was for the place itself, but for the fun memories made with friends. What an incredible time I had living with wonderful people, enjoying classic British afternoon teas, laughing at rowdy Kareoke nights, drinking champagne 25 floors high, disguising myself as a brunette, thrusting my way through an interesting trivia night “sporting” round and being awarded the “best looking company member” at the Billy awards night.

Birmingham was an absolute laugh but finished quite differently to any other venue thus far. The end of Birmingham saw the end of a contract for 3 lovely crew members and 6 talented cast members. Despite the sadness of saying goodbye to close friends it brought a new perspective in light for those that remain. It has made us all realise two things: 1. how incredible this show is and 2. how little time we all have left together. It suddenly hit me that one day this journey will end. One day I will have to say goodbye to these people that feel like family. And then one day I will fly back to Australia and likely not see them again for a very long time. Or never.

Birmingham taught me something very important. Don’t take anything for granted. Enjoy every minute. Because this Billy train is on full steam ahead and will soon be arriving at its final station. So until then I’ll be making the most of every single day. And I can’t wait to do that at our next venue; Liverpool!

One thought on “The UK Tour Part 4: Birmingham”