Five years ago, I was on my Physiotherapy student placements. I was treating my first stroke patient: a Croatian man, whose stroke had sadly caused him to lose the ability to speak English. After weeks of intense rehab, his basic English began to return. With this, the first thing he asked me was, “Have you ever been to Croatia?”

When I explained that I was yet to visit, he replied, “You must go. Croatia is the most beautiful country in the world!”

I still remember the moment so clearly and ever since this day, Croatia has been at the top of my travel wish list. Finally, five years later, I was able to experience what this man meant. And wow – he was not wrong! Croatia is absolutely stunning!

The water was the first thing I noticed. The clarity of the Adriatic sea immediately makes you feel as though you’re in paradise. Every person I passed was happy. Relaxed. How couldn’t you be when you’re in a place like this? Where beautiful palm trees lined the white pebbled coast. Where countless boats bobbed away in the port, reminding me that I was somewhere that could only be reached by sea. I immediately fell in love with the island of Brac and even more so with Bol: a small Croatian town located on the south side of the island. 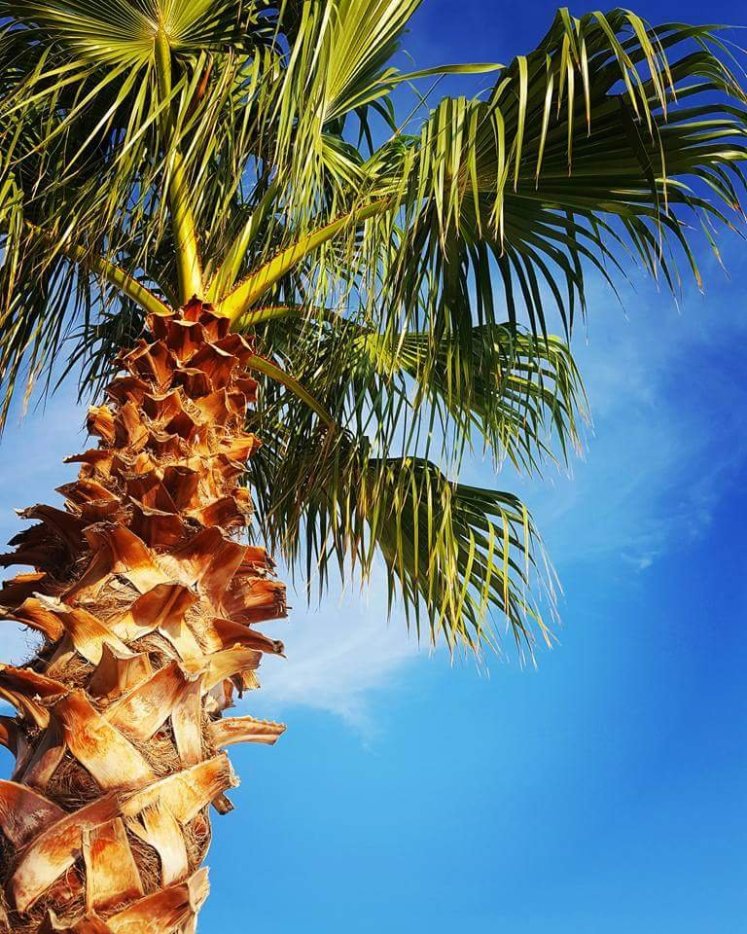 This popular holiday destination is known for its famous beach Zlatni Rat, or the “Golden Horn,” as it’s better known. We were excited to find ourselves back by the sea, but we weren’t about to just sleep on the beach all day, everyday. No, we’re far too adventurous for that! Instead, we were keen to find a balance between experiencing Bol and enjoying some downtown by the beach. And in my opinion….we absolutely nailed it! So, here’s how we made the most of our time in Bol over just three days…

In an attempt to beat the heat, we left early for the hike to Vidova Gora. The view was said to be glorious! We were given the option to either drive to the top or hike. We, of course, chose what we believed to be the more fulfilling of the two options: the hike! Although it was exhausting and caused us to lose litres of sweat, it was completely worth it for the breathtaking picture at the top! 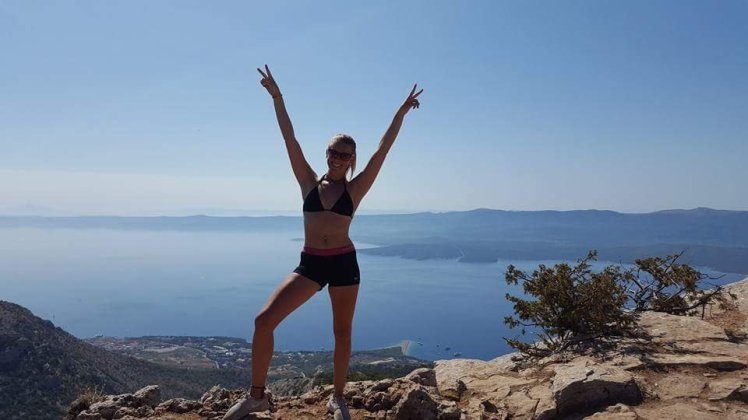 780 metres above sea level, Vidova Gora is the highest point of the Adriatic islands. It offers views of the coast of Brac, Hvar, mainland Croatia and, if it’s a really clear day,  Italy!

The hike begins in Bol (Google map coordinates: 43.265236, 16.649414) and takes approximately two hours to reach the summit and two hours to descend. Just be sure to take it easy on the way down! The loose terrain can lead to multiple trips and slips along the way! Just ask my dear friend Fiona how she got the graze on her knee…

After what turned out to be quite an exhausting morning, we spent the afternoon cooling down at Zlatni Rat, where we were entertained by the incredible kite surfers. We read our books and fell asleep, as we laid on the surprisingly comfortable pebbles. The morning had obviously taken it out of us!

As the sun began to set, we enjoyed local wines and olive oil at Stina Winery. We admired the boats docked in the port and cheers’d to what had been an incredible first day. 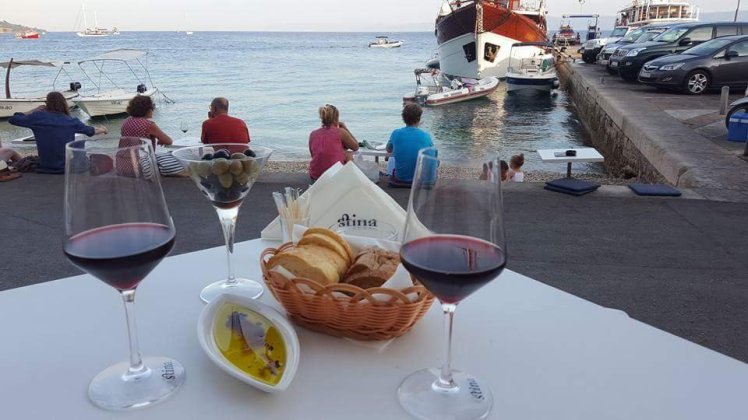 We loved spending time at Zlatni Rat beach, but the two of us were keen to find something a little more secluded. Something off the beaten track. Quiet! So, we hired ourselves some bikes and rode west along the south coast, where we arrived at the nearby town of Murvica. We had intended to “beach hop” along the numerous south coast beaches but, when we discovered the beauty of this beach, it was difficult to tear ourselves away. 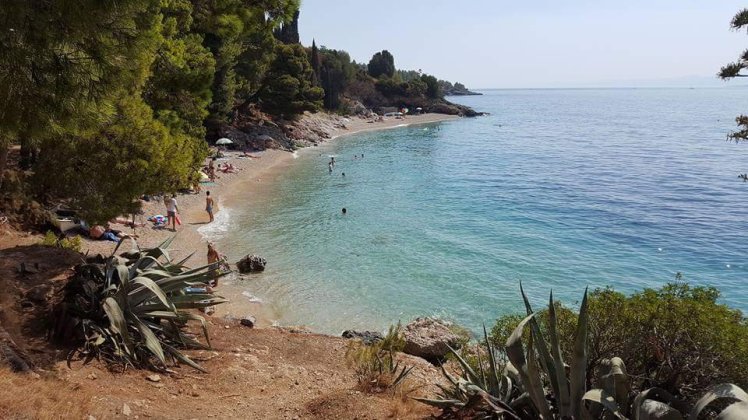 After descending down a steep cliff side,  passing rows of vineyards,  we saw the white pebbles of Murvica beach.  The small cove was quiet and secluded – exactly what we had desired!  And the water – absolutely stunning! In fact, I’m going to call it! Yep – Muvica beach had the clearest water I have ever swam in.  I could even see schools of fish swimming around my toes. And I haven’t even told you my favourite part…the sparkle! As the sun hit the water it literally sparkled.  It was a magical, blue light show. Like there was a sea of blue jewels hidden below the water. We were in paradise!

After making our way back into town, we gathered all the essentials for the perfect sunset moment: a bottle of wine, local olive oils, cheese, and an assortment of nibbles. We positioned ourselves back on Zlatni Rat and waited for the show to begin.  And then suddenly – clouds! Out of nowhere, giant clouds made their way over the setting sun to completely block out its rays. So, sadly there was no sunset that night. Not even a small glimpse of orange in the sky. But, thanks to good food and great company, the night was still, in my opinion, perfect. 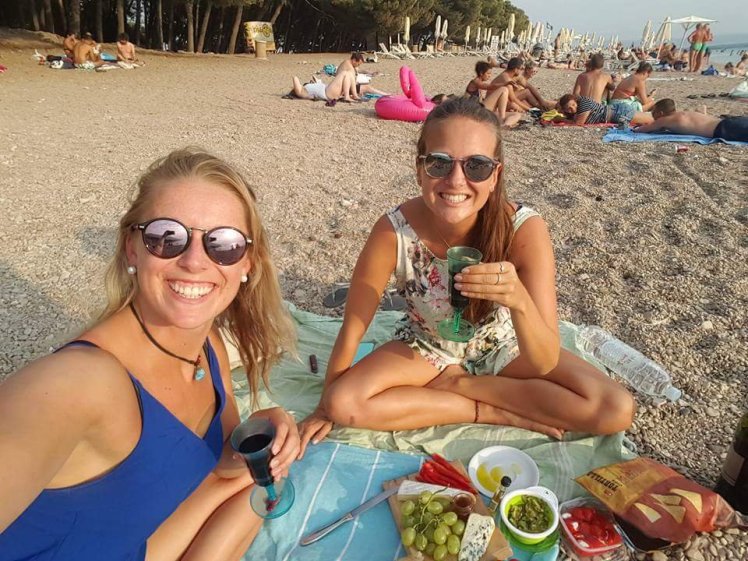 Our final day in Bol saw us hiring sea kayaks and paddling along the south coast. We enjoyed battling the wakes of passing boats and riding the motion of the ocean. But to be honest, I was completely exhausted! I never realised how tiring it was to paddle in the sea. We didn’t last the full 60 minutes but we loved every second of the time we had on the water.

With an hour to kill before catching our ferry to Hvar we decided to spend our time in the classiest way we could imagine: drinking pina coladas on the beach! We couldn’t stop ourselves from singing “if you like pina coladas,” as we reminisced about our incredible three days on the island of Brac. 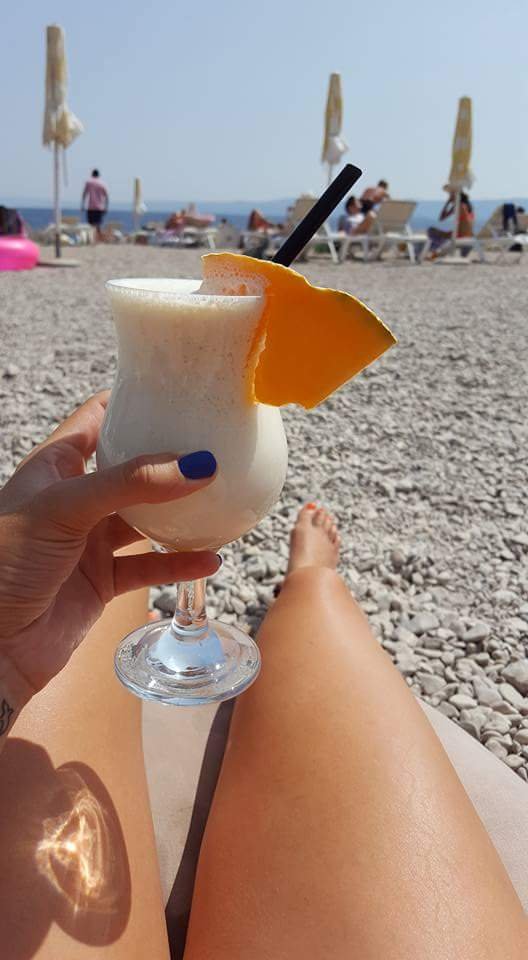