Kotor – now this was how I had pictured Montenegro! As soon as I stepped foot onto the balcony of our apartment, I fell in love. The bay of Kotor was surrounded by the most incredible mountain range and there, in the heart of it all, was the old town. I could have spent hours exploring the streets. Partly because I was so fascinated by the history and partly because we got ourselves lost inside its labrynth. Outside the town, we found abandoned hotels and factories; their broken exteriors likened to a scene from a horror film. Every corner of Kotor had a story to tell, motivating us to explore every inch. So naturally, we explored! A new hike each day. Three days, three hikes and I’m here to tell you about each of them. 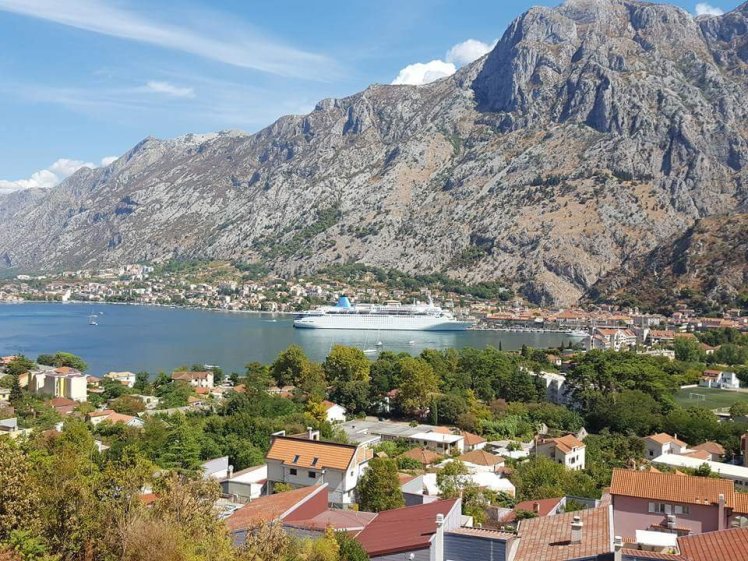 The walk to the castle of San Giovanni, or the castle of St John for English-speakers, is an absolute must when visiting Kotor. These city walls, which ascend the mountain side, were built in the medieval times to protect the city. In the evening, you can see the walls illuminated, creating a perfect loop to enclose the old town. We began our walk at the main entrance near the River Gate, where we paid 3 euros to enter. From here, we began to climb the 1350 steps to the peak.

On the way to the top, we passed the Church of Our Lady of Health. It was at this point that I thought we had reached the top. How very wrong I was! We had a quick peak inside the historical monument, caught our breath and carried on with our journey.

As we reached the peak, we were blessed with stunning sights of the fjords and a bird’s-eye view of the old town. The Montenegrin flag stood proudly in the foreground, while behind us a fortress lay waiting to be explored. After climbing over, under and through the remains of the fortress, we began our descent. This was when the fun began…

At first, we questioned if we were on the right track. We ventured up a set of stairs, away from the crowds, to find ourselves standing on top an old stone building; roof completely caved in, plants crawled up the inside of the walls to spill over the top. I peeked through what I thought to be an old window to find a whole new world. Behind the wall, in the distance, I spotted the ruins of a small cathedral. Higher up the hill stood a farm house with what looked to be a family sitting outside, eating and  laughing. Passing the house, I saw hikers who continued to ascend further up the mountain. I sat myself in the hole in the wall and stared in amazement. It felt as though I had uncovered a secret world hidden behind the walls of the city. Little did I know, that the very next day I would be one of those people venturing behind the walls… 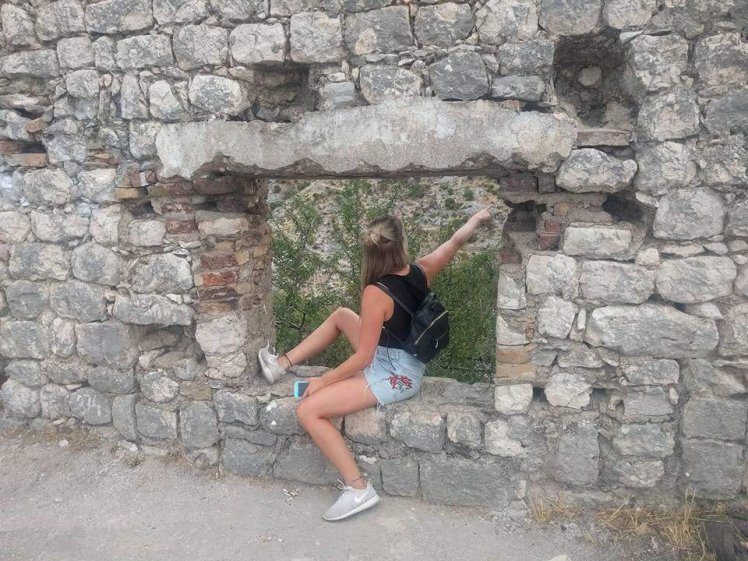 There was no direct route from Kotor to Mount Lovcen. It would take us a bus and a taxi to reach the peak. Suddenly, another suggestion was made. “We could walk it!” “I’m sorry, what?” I replied, slightly confused. I had just been told how difficult it was to reach by transport, how on earth could it be any easier to get there by foot?! I was handed a map and answered with, “We go over!” I studied the red line dotted across the mountain tops. The walk estimated five and a half hours. “Why not?! Let’s do it!”

I’m still not sure if it was the wine or the sheer fact that I can’t read maps, but it wasn’t until later that I actually realised what was ahead. I literally broke into laughter as my friends pointed out the ginormous mountain range standing in front of me. “First, we go over that. And then, once we reach the other side, we go up again…”

I was up for the challenge and determined to reach the top before the forecasted storms hit. We set off early with our day bags packed. It was about two hours into the hike that I finally realised what two months away from the gym does to your fitness. My goodness!! My legs were burning and I, despite the cooler weather, was sweating up a storm!

After three and a half hours of hiking, we finally reached…um, well actually I can’t tell you where we reached. Why? Because technically, my friends, we didn’t make it to Mt Lovcen. We did however, climb over 1000m to find ourselves looking out over the fjords. The views were glorious! Initially, we picked this point to stop and eat our packed lunch. It was as we were munching away on our sandwiches that we thought, ‘Yep! We’re happy with this!’ So, with our bodies feeling exhausted, we decided to make the journey back down, leaving our friend to continue his mission (which he completed, by the way!). Just a little hint – ensure you cool down at the end!!

The third and final walk we completed was a lovely coastal walk along the bay of Kotor. I would recommend completing this after the two previously listed as it will be a nice break from the steep uphill climbs. The flat, steady terrain allows you to take in the amazing surroundings. We took the walk early on a Sunday morning. Few were about, leaving the bay beautifully quiet. As time passed, locals and tourists started to appear, many drinking coffee by the water’s edge. Nuns hurried passed us into church as the bells rang across the bay. I particularly enjoyed spotting two elderly ladies fishing, patiently waiting for a bite as they sat in their fold out chairs.

What fascinated me the most were the ruins we passed. So many decrepit buildings positioned between pristine mansions. Roofs were non-existant and the stone walls had crumbled away. Second storey balconies were left exposed, doors hanging from their hinges. There was something so beautiful and disturbing about them at the same time.

We had aimed to reach a waterfall just past the town of Ljuta, but unfortunately we arrived to a river bed of huge, dry boulders. There would be no waterfall today. Heck – there wasn’t even a trickle of water. We wore our bathers and everything! But hey – it’s all about the journey not just the destination, right?