Bosnia and Herzegovina – it’s not commonly considered a tourist destination. In fact, many people questioned my decision to visit such a place. Of course, why wouldn’t they? For most, Bosnia is associated with devastating images from a war only ending 20 years ago. But today, more and more backpackers are venturing to Bosnia with a desire to learn more. I was one of those backpackers. I mean, this war happened in ‘my time,’ and yes, I may have only been five years old when it ended, but I couldn’t believe how little knowledge I had on this devastating act. I wanted to learn more and with that, I planned a trip to Bosnia to see what I could uncover…

The war began in April 1992, just two months after passing a referendum for independence. This however, was rejected by the Bosnian Serbs who, with support from the Serbian government and Yugoslav People’s Army, mobilised their forces inside Bosnia and Herzegovina in order to secure ethnic Serb territory. The Croats also aimed to secure parts of Bosnia and Herzegovina so, after initially siding with the Bosnian army, turned against them and began the Croat-Bosniak war. 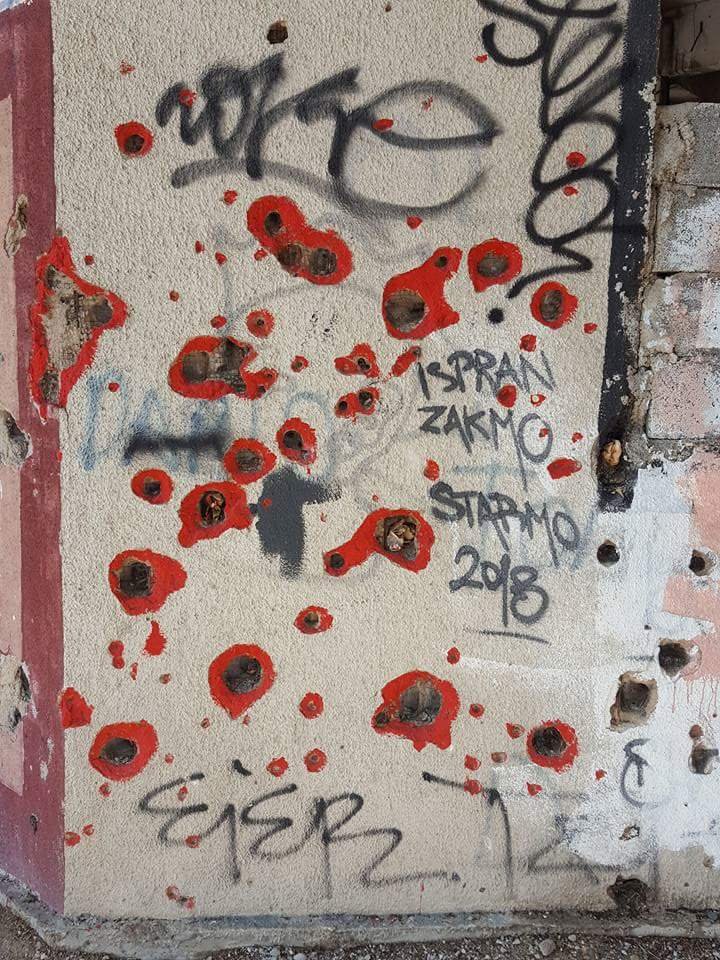 In total, the Bosnians endured 44 months of constant fighting, indiscriminate shelling, ethnic cleansing and systematic rape. 44 months of living in constant fear for their and their family’s lives. 44 months with little food, water or heating. Minimal to no education. Loss of contact with friends and family. 44 months! I couldn’t even begin to imagine what this type of world looked like. I needed to learn more. I immersed myself in intimate tours, spoke with locals, read diaries and visited museums. Information was hard to swallow. It would bring me to tears and at times make me feel ill, especially as I learnt about the horrific Genocide of Srebrenica.

In 1993, UN protection forces declared the bisieged town of Srebrenica a “safe area.” Thousands fled to the northeastern town to seek refuge. However, in July 1995, the Dutch soldiers failed to prevent the capture from the Army of Republic Srpska and the massacre that followed. More than 8372 Bosnians, including women and children, were slaughtered. 8372. Eight thousand. How does it make you feel to hear that? Sad? Confused? What about angry? – that’s how I felt. I think most would. However, what I’m about to tell you now is what inspires me most about the Bosnians. 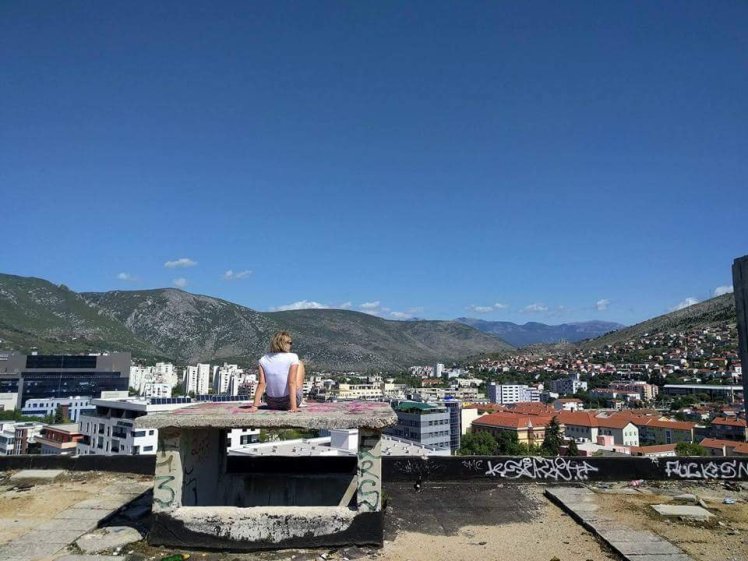 I met two local men: one from Mostar, the other from Sara Jevo. Both were willing to share with me their personal stories from the war. I respect how difficult it would be to share such details and I am therefore grateful for their time. They were not just telling history, they were sharing their memories. Horrific memories that will live with them forever. Yet despite this, each of them had no hatred. “No hard feelings,” they would say. I was in complete shock! How could they be so strong, so resilient, despite everything that was done against them? He responded to what must have been an obvious look of confusion on my face.

“Why fill my body and soul with constant anger? Why poison myself with hatred every single day? It’s no way to live.”

These words stood out to me. How incredibly strong must one be to think this way, despite having seen and experienced what happened? I started to think about my own resilience; a trait I’ve been working to develop over recent years. I realised how upset I can get over the small, petty things in life. Yet here these people were, valuing so much in life despite their tragic history ; it was inspiring!

There is an incredible sense of community in Bosnia. You can feel it as you wander the streets. I asked a local man more as I drank Bosnian coffee by the old bridge of Mostar. “We have a real sense of belonging in this country,” he explained as he interlaced his fingers together.

“We work as one. That’s how we’re able to find strength and move forward during the hard times.”

The strength and resilience of the Bosnians inspired me even more as I discovered the ruins. Hundreds of ruins that remain as a daily reminder of the devastation. Burnt, crumbled buildings, overgrown with weeds. Most covered in graffiti and surrounded by piles of rubbish. Can you imagine having to pass these everyday? More so, can you imagine having to pass the dark, grey building, which noticeably towers over the city? The tower, which is now more commonly referred to as the ‘Sniper Tower of Mostar.’ 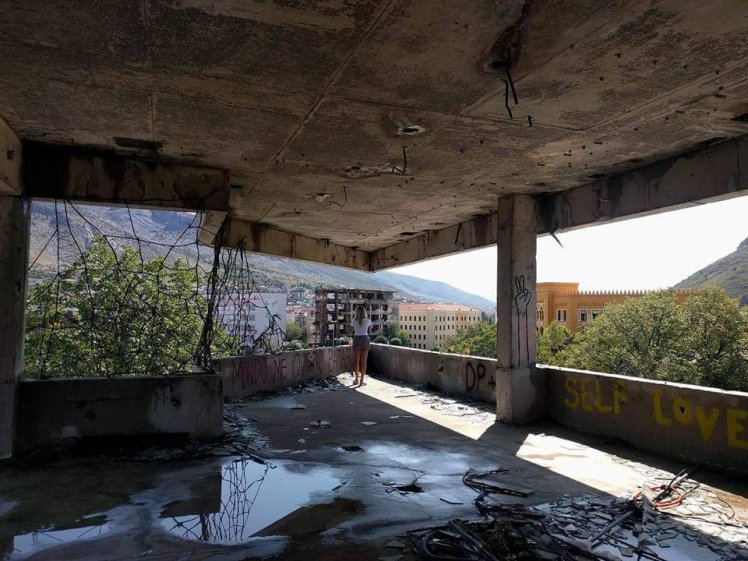 I had visited abandoned sites before, but none with the history that the sniper tower held. Once a local bank, this abandoned building is now left to be explored. It wasn’t easy to enter. I sat on a ledge and jumped down into the darkness. After a minor stumble into the rubble, I dusted myself off and looked for the way up. I studied the graffiti covering the walls, many with political messages. Glass crunched beneath my feet as I continued to escalate the cement stairs. Eventually, I reached a metal ladder and climbed to the roof top. 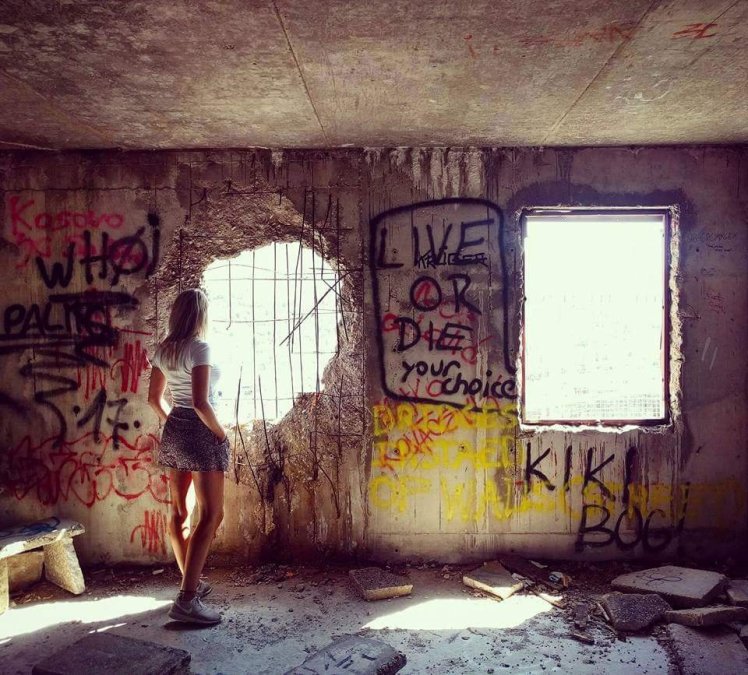 I don’t know how I felt when I found what I believed to be the snipers shooting position; a hole in the wall guarded by a rusty metal grate. I guess it made me feel a little sick. Sad. Perhaps even gratitude as I realised how spoilt I’ve been to live in a country so safe. I’m not sure. All I know is that as I looked through the hole to the town below, I felt heart ache. A deep ache for who I now know to be such beautiful people, who despite feeling rejected, are so willing to let others into their lives with open arms (literally). I didn’t want to leave the people of Bosnia. Hopefully I’ll meet them again in the future… 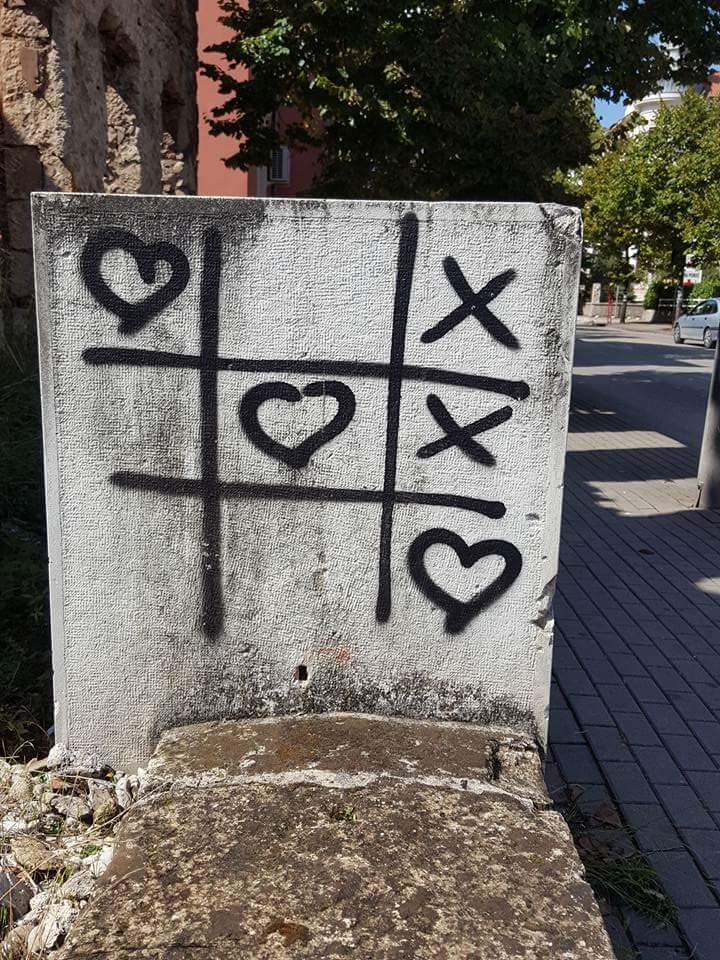 With the aim to keep this post concise, and to respect the locals, I chose to leave out the personal stories and memories I was told. However, if wanting to know more, please feel free to send me questions. If you’re planning to visit Sara Jevo, I highly recommend a visit to the Museum of Crimes Against Humanity and Genocide. Despite being incredibly confronting, I found this museum to be informative and interesting. Just note: ticket payments take place upstairs! Watch for teenagers trying to scam entrance fees.

And finally, if you’re not planning a visit to Bosnia, but would like to learn more, I can recommend reading Zlata’s Diary. Similar to the concept of Anne Frank’s diary, this book portrays the life of an 11-year-old girl during the siege of Sara Jevo. You can purchase her book online here. 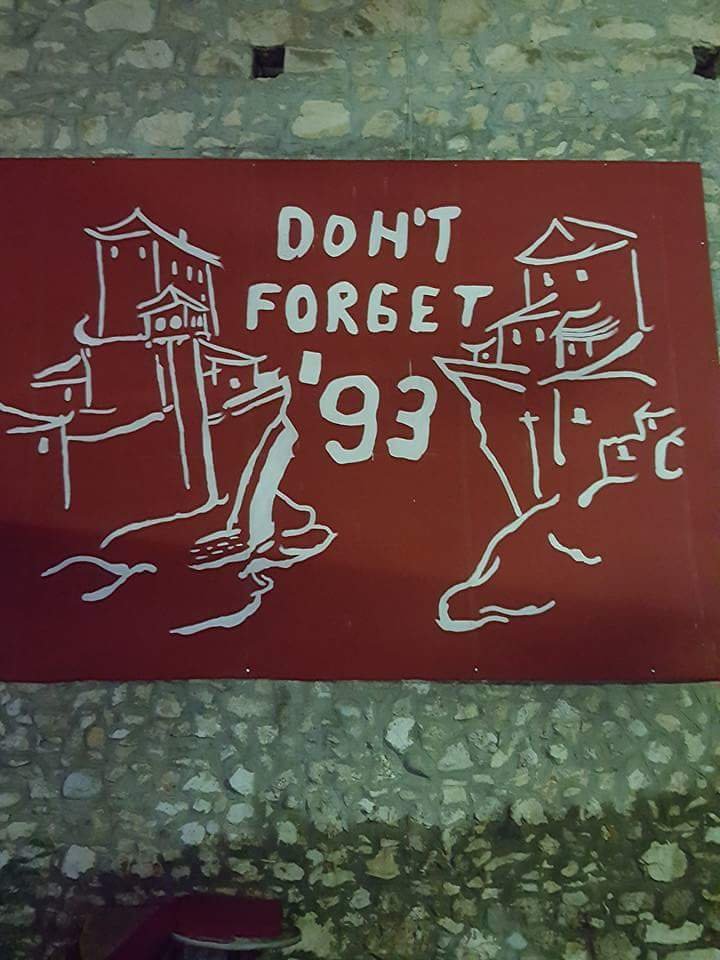 4 thoughts on “Bosnia and Herzegovina: “No Hard Feelings””